Ending the Season with Remarkable Flair 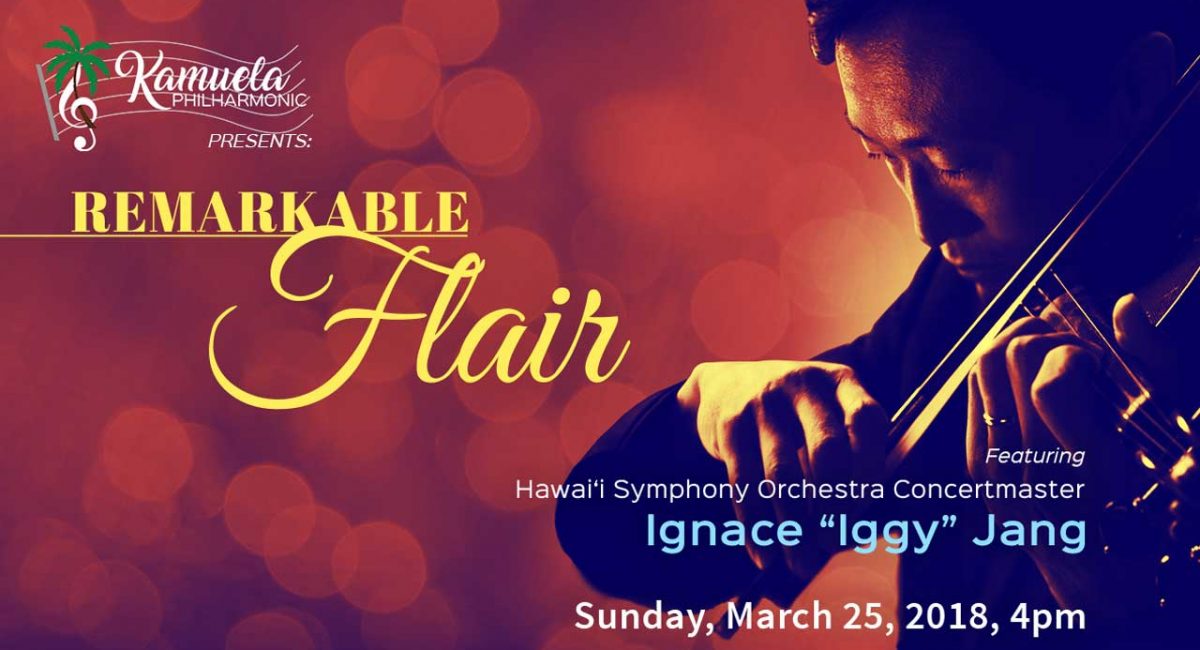 As the end of our 2017/18 Concert Season draws nearer we are very excited to announce that our season finale Remarkable Flair features one of Hawai‘i’s finest violinists and classical music performers.

Ignace Jang, also known as “Iggy,” will be performing alongside the Kamuela Philharmonic during its Remarkable Flair concert on Sunday, March 25 at 4 PM, at Kahilu Theatre in Kamuela. He will be performing Mendelssohn’s famous Violin Concerto in E min, op. 64.

The concerto—a piece full of beautiful technical and melodic gems—was composed by Mendelsohn as a showpiece for his brilliant friend, violinist Ferdinand David, and is now one of the most recognized and most beloved violin concertos in the literature.

As a soloist, Jang’s playing has received praise for its excellent sense of style, impressive musicianship, and uniquely beautiful timbre.

The program for the concert also includes other remarkable and inspiring music such as Mozart’s Overture: Così fan tutte, K. 588, Elgar’s Salut d’Amour, op.12 and Beethoven’s Symphony No. 8 in F maj, op. 93.

Mozart’s familiar overture to the opera, Cosi fan tutte, and Elgar’s popular Salut d’Amour are pieces with a flair that the Orchestra is looking forward to performing. These works, along with Beethoven’s lively Symphony No 8, which is light-hearted in character and cheerfully loud give the Philharmonic a chance to showcase their remarkable talents as well.

Tickets for Remarkable Flair are $43 / $28 / $23, with free admission for those under 18 years old, and are available for purchase online here, at Kahilu Theatre’s website, or by calling and/or visiting the Kahilu Theatre Box Office during normal business hours, Monday–Friday, from 9:00 AM to 1:00 PM.

Ignace Jang’s Bio
Jang is an active soloist, a chamber and orchestral musician, and concertmaster of the Hawai‘i Symphony Orchestra in O‘ahu, and Britt Festivals in Jacksonville, Oregon. He is also a faculty member in the Music Department at the University of Hawai‘i at Manoa and Punahou Music School. Born to Korean parents in Grenoble France, Jang began violin studies at age five, and attended the Paris Conservatory, as well as Indiana University, and is a grand and jury prize recipient. He has performed in concert halls throughout the United States, Europe, and Asia, including solo performances with the Honolulu Symphony, the Colorado Symphony, and Versailles Chamber Orchestra. Since 2011 he has acted as String Program Director of the Hawai‘i Performing Arts Festival in Waimea—one of his most gratifying experiences as an educator. The two-week summer music camp, which offers performing opportunities and various activities, is taught by renowned faculty to talented students from around the globe each summer.