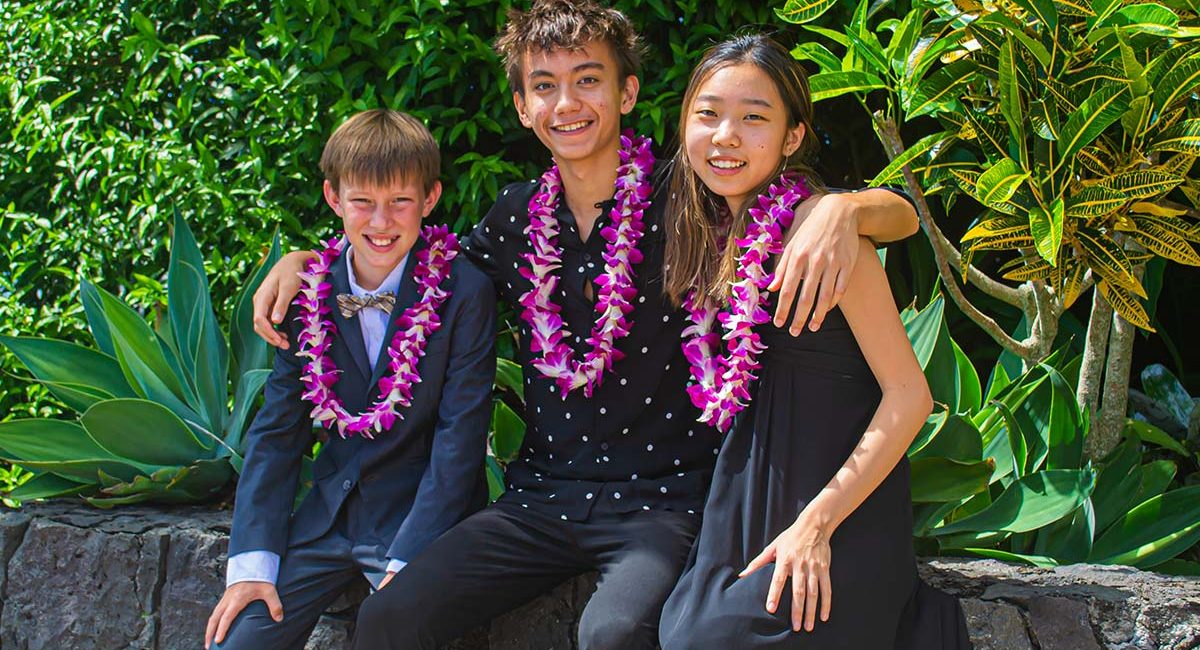 Kamuela, HI—The Kamuela Philharmonic Orchestra (KPO) continues its 2019-20 MasterWorks Season with Innocent Beginnings,—brought to mind by the special nature of innocence and youth when making music at a young age. The concert will be at the Kahilu Theatre in Waimea on Sunday, January 26, 2020, at 2:00 PM.

The program features performances by the winners of the KPO’s annual Madeline Schatz-Harris Youth Concerto Competition. Accompanied by the Orchestra, violinist Sevastyan Swan will play the first movement of Spring from Antonio Vivaldi’s The Four Seasons; cellist Alexander Canicosa-Miles will perform the first and second movements from Edward Elgar’s Concerto in E Minor for Cello, opus 85; and cellist Mira Hu will play the first movement of Dmitri Kabalevsky’s Concerto in G minor for cello, op. 49.

“Our winter concert is one of my favorite performances every year because I truly enjoy working with our young competition winners,” said Brian Dollinger, KPO Artistic Director and Conductor. “They all are such fabulous players, it’s wonderful to give them, for most, their first performance opportunity with a full orchestra accompanying them—truly a lifetime memory.”

Also included in the program are the overture to Ludwig van Beethoven’s one and only opera Fidelio,—considered by many to be one his greatest works—, and Pyotr Ilyich Tchaikovsky’s first large-scale work, Symphony No. 1 in G minor, op.13.

“With the entire world celebrating the anniversary of Ludwig van Beethoven’s birthday all 2020, I thought it was a fitting role for our first piece and first sounds of the Orchestra in 2020 to be by him,” Dollinger added. “His ‘Fidelio’ Overture will definitely be a great way to kick things off.”

Cellist Mira Hu (16) studies with Nancy Masaki of Honolulu. She has loved the Kabalevsky Concerto she is performing since she first heard the piece, and considers it a “hidden gem since it isn’t played that often.” According to Hu, the piece is technically challenging and filled with various emotions. The movement begins as a march, then “the cello comes in with a hypnotic feeling.” It showcases a short cadenza, which consists of octave runs that she found very difficult to get in tune at first, but helped her improve her technique as she worked on it. Mira finds the whole piece “filled with so much energy,” and playing it with the piano gets her excited every time, so she is “thrilled to have the opportunity to play it with the Kamuela Philharmonic.”

Alexander Canicosa-Miles (15)—a winner of the competition four years ago—studies cello with Jonathan Koh of Honolulu. Since his last performance with the orchestra, Canicosa-Miles has grown, not only in stature but also ability. He is looking forward to again performing with the “incredibly dedicated and passionate musicians” in the Kamuela Philharmonic. Alexander said, “the highlight of this competition is being able to collaborate and share the stage with musicians who find it equally as important as he does to share the gift of music.” He chose the 1st and 2nd movement of Elgar’s Cello Concerto to perform because of the contrasting emotional journey it portrays. To him, “the concerto starts out very powerful, then surrenders to a sense of sorrow, torment and at times cries out against life.” His playing reflects that emotional journey very sensitively.

Sevastyan Swan (11), a violin student of Sheryl Shohet of Honolulu for the last eight years, has competed in this event twice before. He was “shocked and glad” when his name was announced as a winner this time, but noted that he was willing to put in the effort and keep going after his losses, and “after lots of practice, it paid off.” Sevastyan chose the first movement of Spring from Vivaldi’s Four Seasons, because he liked the challenge of working up the really fast middle section of the movement.

The Kamuela Philharmonic Orchestra’s presentation of Innocent Beginnings is made possible with support by The Dorrance Family Foundation.

About the Kamuela Philharmonic Orchestra

The Kamuela Philharmonic Orchestra (KPO) is a non-profit organization dedicated to bringing live, high-quality orchestral music to audiences on Hawai‘i Island. KPO celebrates and promotes the timeless beauty of classical music, as well as the rich cultural and musical traditions of the Hawaiian people. The Orchestra is a charitable organization as described in Section 501(c)(3). Those who wish to contribute to this endeavor, either financially or in other ways, are encouraged to contact the KPO either through its website or at P.O. Box 2597, Kamuela, HI 96743.